I am born on the  01. August 1975 in Wipperfuerth which is in the community of Gummersbach in the area of Remscheid (North-Rhine-Westphalia (NRW), Germany), where my Grandparents lives still today and my parents are growing up. My father was just 1 year back from El Paso, Texas, USA where he was as a Soldier for the German Bundeswehr with my mother Rita Sagel (27.01.1953) and where also my brother Denny was born on the 20. February 1973  After the time as a soldier, my father Klaus Sagel (16.11.1948), got a job by an american company in Frechen in the area of Cologne (Koeln). We moved in that area into a little town which is called Manheim (first written in 898 after Christ !). It is part of the community of the city Kerpen, from where is also Michael and Ralf Schumacher and Graf Berghe von Tripps (FORMULA 1 - driver). Here I was growing up in real peacefull countrysite. My parents are divorced since 1984. I went to the Highschool for Economy (Hoeheren Handelsschule) and went allready on the way for a salesman. Later I made an education as a salesman for houses (Kaufmann in der Grundstuecks- und Wohnungswirtschaft) and got a job at a company in Cologne (Koeln), which closed the office in Cologne after 1 year and so I followed my way in the education at the general-office in Bonn (At that time the Capital-city / Today it is Berlin again).Since the 12th of October 1996 I am together with Esther Heydeck (Master of Justice for the German goverment). We are married since 11 of June 2004. Together we have 2 sons now: Timon (2005) and Henrik (2007) and we bought a house in the city of Kerpen. Since the 01. July 1998 I worked as a free Salesman and officeleader for the Erftkreis (BM – where I live) in the name of the BHW Immobilien ltd.. After some time this job was not enough for me and for that what I wanted to reach and so I changed very soon (on the 01. June.1999) to the well known Real-Estate-company Von Emhofen Immobilien Koeln (Cologne), which was part of the worldwide franchisesystem Dr. Stange & Co. Nachf. Here I  am working from the office at my home.

In neighbour to the familyresearch I am interested in the Bonsai-art, I am doing Tai Chi. I was active in political work for the FDP (Liberal Democratic Party of Germany) until 2002,  I am interested in historical buildings how I came to the Deutschen Burgenvereinigung (German Club for help castles and palaces) and to the Deutschen Stiftung Denkmalschutz (German Heritage Foundation). Jesus Christ and philosophic questions are also very important for me! My big love for Afrika I developed while my studentexchange over 1 month in 1995 into a Southafrican Zulu-family. Still today this land and the people of it are enjoying my bigest respect. But my hobby to travel is allready expand on the map (West of the USA, Mexiko, Zimbabwe, Canada, Russia, Thailand, Cambodia, Panama (Sagel-Reunion in 2001), Namibia (Sagel-Reunion 2002) Venezuela / Brazil 2003, as well as nearly every european city and nation...) so that I don´t have to spend every holidays in Southafrica.

In September 1998 I began with intensiv work at the familyresearch and very soon I got a very interesting adress: The states-archive of Hessen in Marburg gave me the adress of Dr. Albert Sagell, in Bremen (northern Germany), who was busy and practice intensive familyresearch for the last 20 years for the names Sagel, Sagell, Saggel, Sachel and Zachel. I wrote to him. Some days later I got a letter of Else Sagell. She wrotes, I am sorry still today, that her husband passed away in 1993 in the age of  73 years and she is having more than 4 or 5 books (spring covers), which I can see if I would come to Bremen once. Because Bremen was ca. 5 to 6 hours away from me, I told to myself: Who knows if the papers in there are including also my familytree? But I was very intersted to see it. We phoned sometimes and we had a very good relationship. Because of the trustworthy this 78-years old lady had in me she sended this 4 spring covers by the post to me. It was like a goldmine and very big luck for a familyresearcher. The spring covers were full of documents and the translations from 1288 up, over the centuries. Dr. Albert Sagell as a doctor had have the talent (gift) to translate the OLD-German language and the Latin words into the Actual German with a machine. It was to read for everybody! This man, who I never meet by myself I have to thank very very much, and I do have very big respect to his work, which I try to expand still today. So it was also coming to the installation of this Homepage. Without these documents and the results of his family-research I would not be there where I am today. But I have still invested a lot of money, time and work into the further research. Because it costs duty, if I want to have some informations by public departements or churches. But every time I also meet some people which are so helpfull like Frau Else Sagell (The name Sagel was expanded with a second L, something like  150 years back so that it is hearing more french...) which are working and spent some time for me and the familyresearch without money-interests or something like that. All those people I want to thank here again !!! 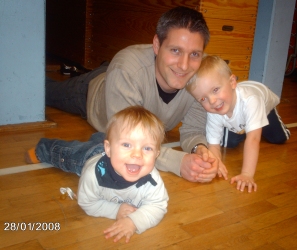